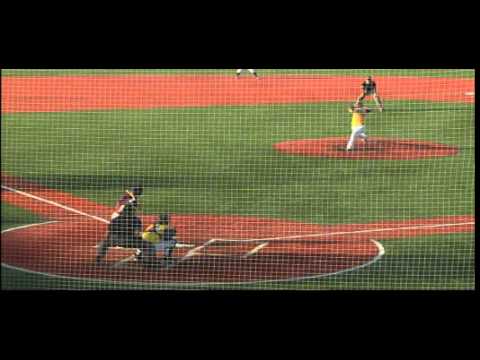 Casey Delgado and Ian MacDougall allowed just a combined one earned run in their starts of Wednesday’s doubleheader, but the Evansville Otters found a way to sweep the twin-bill from the Traverse City Beach Bums, 3-2 and 1-0 at Wuerfel Park.

Delgado was cruising in the first game, allowing just two hits through six innings. The only run he had given up was thanks to a hit by pitch, sac bunt, groundout, and error in the fourth. He took to the mound with a 2-1 lead in the seventh and got a fly ball to lead off the frame, but Taylor Wrenn couldn’t complete the grab in left, putting the leadoff man on second.

D.J. Johnson (0-2) came out of the bullpen and gave up a game-tying double to Chris Sweeney off the right field wall. Sweeney moved to third on a groundout and scored two batters later on an RBI infield single from Cory Urquhart to give the Otters a 3-2 lead. Orlando Santos struck out the side in the first game for his seventh save.

MacDougall started the nightcap and made just one mistake in his outing, a run-scoring double off the bat of Chris Elder with two outs in the third inning scoring Kolin Conner to make it 1-0 Otters. Aside from that, MacDougall (1-1) was solid in his first professional start, allowing a run on three hits with three punchouts in 4.1 innings.