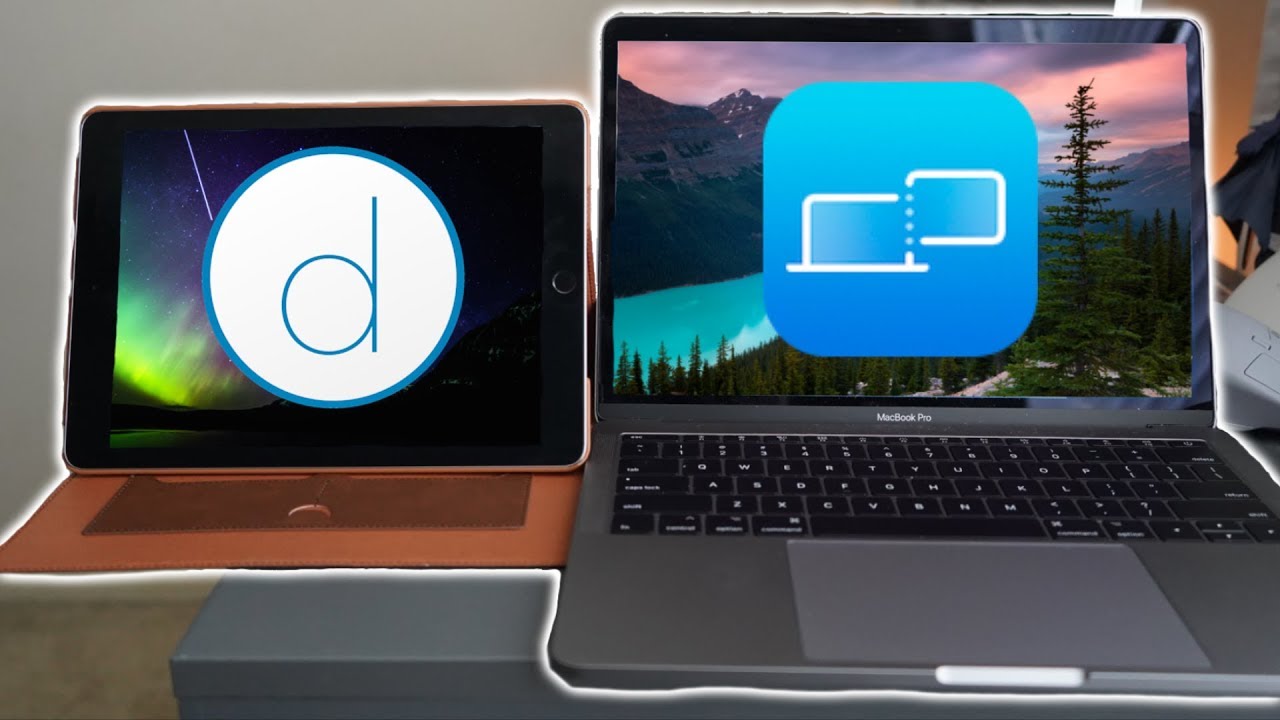 With the new MacOS 10.14 update and iOS 13 update, apple released a new exciting feature, the ability to turn your ipad into a portable monitor for your mac labeled Sidecar. Get it, cause it’s a tiny screen compared to your bigger one. But wait, there’s already an app out there that does that. Duet Display. The question then becomes why should I bother paying for something that costs $15 when Apple lets me do that for free already. And the answer might surprise you. Today we’ll be comparing Apple Sidecar to Duet Display and why you should use or the other. Let’s get started with a little review.

Let’s start off by talking about compatibility, Apple side car only works with a limited number of macs and ipads that apple outlines on their support site and it’s really limited. Which means if you haven’t upgraded your apple gear in in the last 3 or 4 years and you’re hoping to turn your ancient barely functioning ipad or mac into a dual display workstation it’s not gonna work out. Sidecar is out of the question. Say your mac meets the requirements and your iPad doesn’t? Too bad. On the other hand, duet display works with a Mac running MacOS 10.9 and above, and iOS devices running iOS 13 and above which opens up a lot of different macs and ipads. Not only that but they have support for android and windows devices as well. I personally haven’t tested android devices with duet, but pairing my ipad to my windows desktop has been painless with the exception of some minor issues. So, in terms of versatility Duet Display is definitely more versatile with compatibility but I find that older macs and PCs struggle with running duet display at higher quality settings. And on lower spec machines can cause the screen to stutter.

Now, let’s compare usability. Sidecar can be used wirelessly or connected via usb. The display quality is good, it’s not “retina” quality but good considering my ipad’s size, lag is minimal, and you get some cool features like pulling up a touch keyboard, touchbar functionality, and a button to quickly move the dock across screens. Touch screen support is finnicky, some things you can use the touchscreen for, like scrolling through safari, but you can’t click on things with the display. On the other hand, Duet Display requires a wired connection from your laptop to your tablet unless you pay for the $20 a year “air” subscription plan, which sucks considering you’re already paid $10 for the app and the image quality is just as good as sidecar on its highest setting except the colors are a little more washed. But, Duet Display does let you choose what resolution you want your ipad to use, as well as the frame rate, and energy efficiency settings on both mac and pc. But, at its highest settings, I still don’t think Duet Display looks as good as Apple’s sidecar even if they offer. So, just keep that in mind.

On paper both seem fantastic offering sometimes unique benefits. I’ve had duet for about 2-3 years and I can tell you while it works great most of the time, it’s provided me some minor problems too. It messes with your computer’s drivers to get it to work properly. So some updates do weird things. Like one time my MacBook Pro would constantly have transparency turned off, I would of course, turn that back on because it made the UI prettier. Yeah, I’m a sucker for that aesthetic. But when I let the MacBook sleep and later open it up again. Same problem. Consistently. It didn’t fix itself until I either uninstalled duet or the app updated.
Another issue I’ve had with Duet is that for awhile, when using it on my pc, it would stop me from playing some games by outright crashing it, like Skyrim, The Witcher 3 and Dragon Age Inquisition. It really hated good western fantasy rpgs for some reason. Sidecar on the other hand, works mostly without issues, but lacks options to scale the ui or resolution, at least, on my 6th gen iPad. And I can’t seem to get sidecar set up with a physical connection. I’ll pin a comment if I figure that out.

So, in conclusion, yes. Sidecar is a great, free option of using your iPad as a secondary display. If you use nothing but newer apple devices, then it’s probably all you need. But Duet Display still has a place in this world. While it does sometimes cause minor driver issues, it still gives you the most robust control of turning your ipad, iphone, android phone, or tablet into a secondary display and has support for more operating systems. So, while sidecar is great, it won’t replace Duet Display, but it does compliment it really well.

50 comments on “Apple Sidecar vs Duet Display: What's the Difference?”

Well now have to pay ". Everything change right?

no clue what the fuck your even explaining about.

Guys does this work with MacOS Bigsur?

İ get my answers, thanks 😊

I use duet on my iPad Pro 2018 and MacBook Pro 2015 but I experienced extreme lag which makes it unusable for editing (my main work)…. Hope to find a solution soon!

I have a macbook pro late 2013, i just bought the ipad air. But i can not leave my macbook pro cause i like him. I went so happy to share with Side car, but it doesnt appear for me…

And now im scared to install the Duet, cause i saw people saying about hackers, and that it opens my screen chanel or something like that…

Can I then use my Apple pencil to draw and sculpt in Windows 3D design software like Blender.

This is great. I've been using Duet for a long time…Also, I can't upgrade my OS so Duet for me works fine. LOL…

started to use air display

Another top notch video I caught late lol. I am using a 2016 MBP on Mojave because I've heard horror stories about upgrades to Catalina and Big Sur. I do not wish to upgrade the OS if it forces me to upgrade the MBP, so I will stick with Duet for my secondary monitor needs. Thanks!

If you want to use photoshop on a PC and use your iPad as a drafting tablet, Duet is your only option. It actually works really well on PC. I discovered sidecar on my 2020 iMac, and then thought, "Man, I need this on my PC!" Thus I discovered Duet Display. Also nice that it works on my 2014 MacBook and 2011 iMac.

For those of you who are considering getting this: I have the 2017 MacBook Pro 15" with the atrocious butterfly keyboard. The solution to this is to consider the MacBook Pro as the secondary screen and use the 12.9" iPad Pro with the Magic Keyboard case as the main computer instead of the MacBook. With this method, I have successfully converted the iPad Pro into the main computer with Mac OS with an absolutely amazing keyboard. I used USB – C to USB – C with sidecar with no issues (do not do the wireless connection of sidecar, it severely messed up your wireless connection). You're welcome!

Does Mac voice over work for totally blind user like me? I have a iMac Pro, but no iPad to test mirror the Mac screen? I look on YouTube no results please try this idea and let me know. Thank You!

Glad I found this channel! Your videos are so good!

Duet Fails to Install on Windows7

A file that is required cannot be installed because the cabinet file C:Users***AppDataRoamingKairosDuet Display 1.9.0.8instalDuetSetup1.cab has an invalid digital signature. This may indicate that the cabinet fle is corrupt.

Duet Display is all worth it for that sweet sweet touch ba- I MEAN second display. and, it works on windows!

I am not happy with Sidecar because it requires Apple's buggy, unreliable 2 factor authentication (2FA). 2FA also requires disk encryption, which slows down my MBP and makes Time Machine backups take forever. Duet shows that there is no good reason for 2FA. Apple's 2FA is really just trying to make you more and more locked into the Apple ecosystem, which is an illegal monopolist move by Apple. Apple is being sued by iOS developers for its monopolist behavior. I hope they win and we regain control of the Apple hardware we paid so dearly for.

How do you connect the ipad to the macbook pro? When I use my USB cable, it doesn't detect it. It only connects wireless but the connection keeps dropping.

Thanks for the helpful info. May from Taiwan

I love the side car feature definitely is very promising! But it wasn’t wireless anywhere. I wanted access to my iPad Pro anywhere I went. So I tried duet display and the resolution was terrible and the lag was worse. I am now using screens 4 and it’s God send definitely worth it but Sidecar is the future I look forward to it

help me please when i use it, it makes my main monitor blurry an dit goes black for 1 second i dont know what to do.

The app comments are not talking like you.This app is not very functional.In the other hand,I dont advise the app too.

Lol before this video i got the Duet display add😂😂

Can you use MacBook Air as 2nd screen for Surface Pro?

Can you use Sidecar on your iPad and Duet Display on your iPhone at the same time?

Hey I have a MacBook Air and an iPad Pro. When I use duet, my computer’s fan runs constantly. Granted, it doesn’t over heat or is it warm to the touch(the computer that it) but I find it a bit disconcerting. Have you encountered the same issue?

I wonder if it could do some battery damage over time if you use it through the cable, cause as I know it is not good to work on a device that is charging.

got a 2012 macbook pro and Ipad 2, I use Duet Display since it was released, it ok for what I do with it and is really stable on my devices 😉

Do not install Duet on windows 10. Mine has crashed

Hi no I wasn’t looking to transfer actual files but I am trying to drag a document onto the iPad screen and want to work on another document on the Mac. As I drag a file it doesn’t move across from Mac to iPad. Ideally I want to work on a word doc on the Mac and refer to a different doc moved onto the sidecar ipad

Hi I have purchased duet and it shows the main screen perfectly from my mac onto my ipad however I cant move documents etc across from mac to ipad which is what I wanted this app for. Does anyone have any ideas?

drain the battery of laptop so fast, as it keep charing the tablet, any solution?

Have started using sidecar but, always for reasons I don't understand it crashed at some point. To solve I had to restart my MacBook Pro. So, I decided to pay $ 10.00 to test Duet Display. For me, Duet is perfect and the only drawback is the wire connection. If apple improves the reliability of Sidecar, definitively it will be a better solution for someone who has only apple's products.

All Sidecar does is drain my computer. avconferenced and Windowserver both around 25% of CPU.

Great video, thank you. Will Duet allow you to broadcast from the iPad to the laptop screen, as to use the laptop as the iPad's 2nd monitor to view ios apps?